Posted on October 5, 2010 by Administrator

By now, most of you are probably aware, that we’ve been doing a LOT of stuff to our house since we bought it just over 2 years ago.

This will be the first post in probably a series on the things we did and are in the process of doing to our house to make it more energy efficient and environmentally friendly.

In many ways, the changes were to change outdated decor, outdated fixtures, adding livability, functionality as well as aesthetic value to the house etc

However, the biggest changes we made to the house and many things in it are not even that obvious, yet they are designed to help us be a LOT more energy efficient which will be very good for our pocket book and good for the environment in the long run.

Here are some of the little and large things we have done or are in the process of doing:

When we moved into this house, the windows were a joke. I think they were just there to look like windows as they did little of what windows were actually supposed to do. When it rained, the water came right through. Granted we don’t get much rain around here, but when we do it is usually rather a lot all at once and well it came right through the flimsy frames. They were drafty as all get out, which in Phx means the HEAT gets in a lot and the air-conditioned air gets out a lot. And they didn’t do much as a noise barrier either.

I can’t begin to tell you what a HUGE difference this made. The first thing I noticed was how much more quiet it was. Don’t laugh, it was really noticeable! Not only did we barely hear the constant barking of the dog next door anymore, it seemed so much more quiet because the air conditioning wasn’t on all the time anymore.

See, I don’t do heat very well for various reasons. So, our house is kept somewhere around the 72-75 F mark most times, which is not easy or cheap to do in Phoenix!

The windows however went a LONG way to get the costs of that down! The cold stays in, the heat stays out and as a nice side effect, so does the volume of a lot of other somewhat annoying noises! Like dogs barking …

And they look so much nicer too!

My husband’s hobby horse! The house we bought had minimal insulation. Even though built in the mid 80s, it still hadn’t been included in the more insulation-conscious era of building around here. So, this meant, no insulation in the attic. We don’t have much of an attic space but it is very much enough for heat to accumulate and to warm up the entire house, making the air conditioning work harder yet again.

So, my husband spent many hot summer weeks up there in the attic at 5 am or earlier as this was the only time you could bear to be up there for an hour or so and installed radiant barrier insulation sheets. In case you are not familiar with radiant barrier systems, their function is to reflect the heat, rather than trying to absorb it, like some of the more traditional insulation materials (fiber glass, styrofoam, etc) 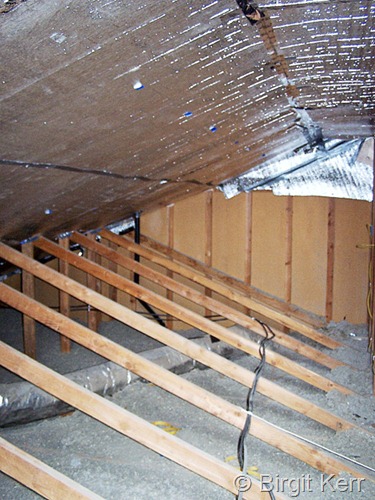 Once he was done with that, we had several inches of insulation fill blown in to add another barrier from the roof to our ceilings.

The same principle applies to our extension. We used aluminum faced plywood etc. It creates a radiant barrier and sends the heat back out before it can even enter the house! 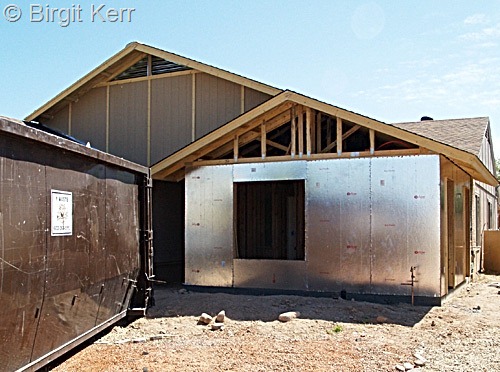 Obviously this is the easiest way to lower your energy bills. We have energy efficient light bulbs in absolutely everything in the house. For the most part we choose the ones that have the extra glass bulb around it, as it reduces the risk of accidental breakage (and with that mercury spillage) greatly. It seems important in a house with two toddlers!

This pretty much goes without saying. We had to replace all of our appliances anyway (except washer and dryer, which weren’t all that old.) Obviously it makes sense to get the energy star rated ones! I found that even a few years seem to make a huge difference in how much more energy saving appliances can be!

That unit is my baby. As I have said before, I don’t do heat well. And it’s hot here. Very hot, and a lot of the time. So the air conditioning unit is very necessary not only for survival, but for well being around here.  It also happens to be the MAJOR component on our electricity bill.

So having the air conditioning unit in tip top condition is very important. However, it goes further than that. The unit we got with the house was relatively new – 3-4 years old.

However, even though we had no problems with it, we had it checked out only to find that there were some components that were badly installed that could have meant a failing unit years before it’s time, but also really drained us on energy costs.

Air conditioning costs in PHX during the summer are horrendous and a lot of the energy efficient task work to the end of reducing that cost! So we have our unit on a maintenance program with a company here. The find things before there is a problem and they fix them for a much lower price.

Another thing that influences the energy efficiency of an air conditioning unit is  it’s suitability for the size of your home and how efficient air flow is. We found that our house had some very strange duct work going on, that led to some rooms being incredibly hot, while others were way cold. We also found that the living room, which was furthest away from the unit hardly got any air flow.

My husband solved the problem by opening up the vents in the various rooms and wedging a piece of radiant barrier material in. It directs the air flow significantly and we now have a pretty balanced output.

It is also important to check your thermometer. Make sure it is updated and programmable. I had no idea just how much difference the updating of the thermometer alone can make in the workings of a unit as well as the monthly bill!  We experienced a significant difference in both in our old house when we changed ours!

Obviously cleaning out the ducts and changing the filters regularly are a good way to help the air quality in your home and help the unit to work less hard, which in turn promotes the good running of it!

Our water heater was old and in terrible shape when we bought the house. Earlier this year we managed to get into the government’s “Cash for Appliances “ program which saved us a bundle. We’re talking several 100s of dollars on the unit itself and we’re going to get 30% back come tax time too! Not to mention what that water heater is going to save us on a monthly basis!

We had to replace both toilets in our house anyway and opted for the low flush kind. They weren’t any more expensive, we can’t tell any difference in terms of flush volume. The waste goes away fully every time even with so much less water. Even prior to the new toilets, we had a brick in our water cistern, so it really didn’t mean much of a change for us.

Before the year is out, we will have a bunch of solar panels installed on our roof.

When we built the extension, we also had this in mind and made sure that the roof was at an optimal angel for this. Making the roof optimal for solar panels was also a huge part of our decision to do construction to the house!

But the whole process of “going solar” will be a separate post, as I want to be much more detailed about everything that goes into that, comes out of it and what the cost and the savings is in the end!

So, after doing all that, how much are we saving? Currently an average of about $60-80 a month (depending on on just how hot the  year turns out to be.)

That’s without the impact of the solar panels. We stand to save an average of another $120/ month once those are hooked up! And that is with a larger house, since our addition.

We also get back 30% on the water heater, the energy efficient windows etc on our taxes.