Posted on November 30, 2010 by Administrator 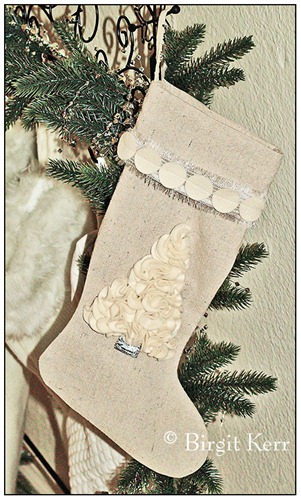 Initially I wanted to make a version of a pillow inspired by this one: 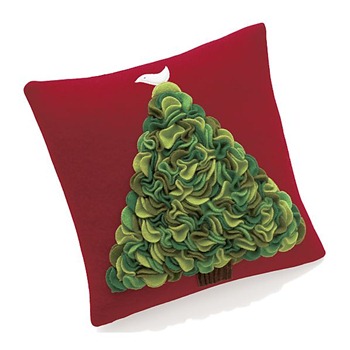 but then I thought that it might look really cute in a simpler form on a stocking!

For the stocking material I used Painter’s drop cloth! It is so nice to work with!

The most labor intensive thing is probably cutting the felt circles, but you can find pre-cut felt circles on ebay and other places. They are often sold as scrapbook embellishments! 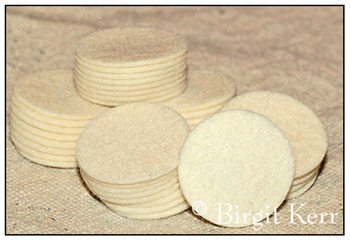 I used about 50 x 1 inch circles for my little tree and then another 12 for the cuff.

First I drew out the basic shape of my stocking on a folded drop cloth. Also positioning the tree, so I would know what size I was going for. I didn’t worry about the pen lines as all this was going to be on the inside of the stocking anyway! 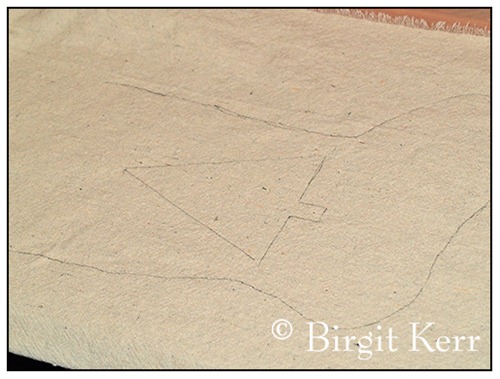 Then I cut it out, leaving about 1/4 –1/2 inch seam allowance around the drawn line.

I stitched the two parts of the stocking together and just went over the edges with a zig-zag stitch. I’m not sure it was really necessary but I wanted to avoid too much fraying!

Next I drew my tree outline on a different piece of drop-cloth fabric and cut that out, again leaving some seam allowance, so I could quickly stitch down the edges of the tree.

I forgot to take a picture of that step for some reason, but you can see it on this one. Basically I just folded over the edges a little and ran a very quick stitch along it. 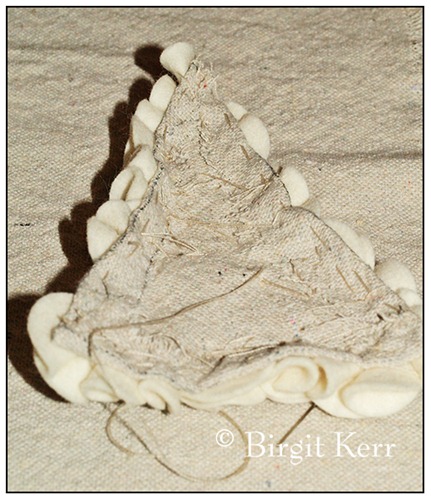 And then I just started sewing on the circles. As I went I figured there were several good ways to go!

I think the pictures will show you much better what I’m talking about.

Basically you tack each circle down with 1 or 2 small stitches, preferably in a place where it won’t be seen later. Sometimes it helps to fold them up first in half or quarter circles, sometimes you start with it flat, facing left, right, up or down. 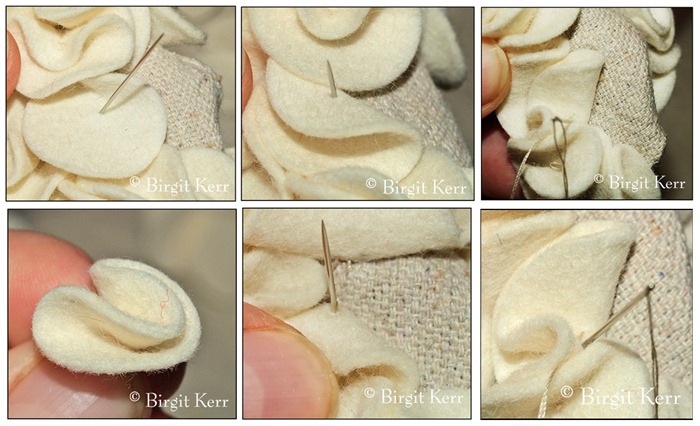 You want to slightly overlap at the edges, so your stitching won’t be visible once you sew the tree onto the stocking! And very soon, you’ll have this going on: 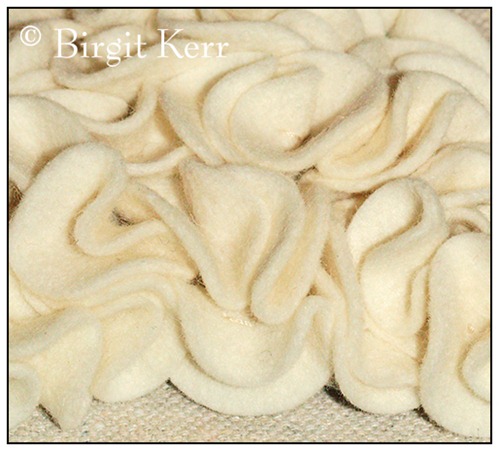 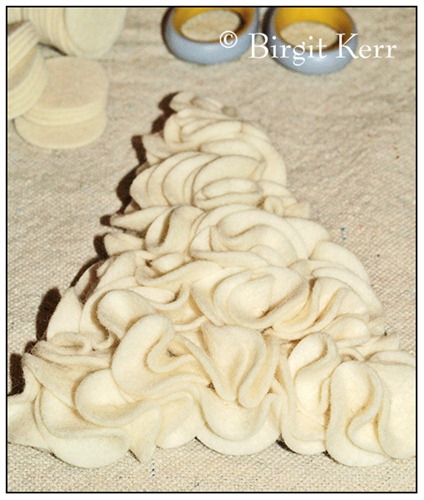 Next I folded up a length of silver ribbon and attached it to the back of the tree with a few stitches. This will be the tree trunk. 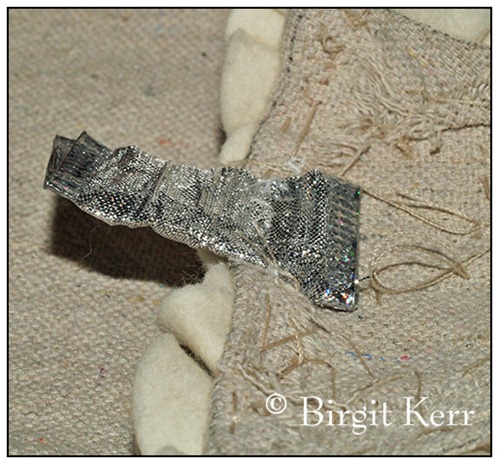 Now for the finishing touches. I made the cuff and the loop for the stocking, sewed that onto the stocking. I turned the stocking inside out, then I pressed all the seams with an iron. This is important to do before you sew the felt tree on as it won’t lay flat anymore after that.

Then I positioned the felt tree on the stocking and stitched it on, making sure I was stitching down the triangle fabric backing, rather than the felt circles.

I also used some leftover felt circles to embellish a length of dollar store ribbon. 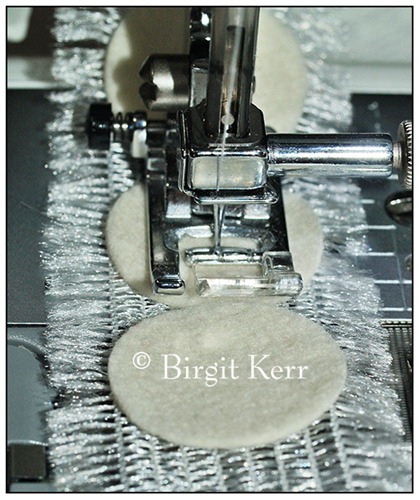 Last I stitched the dotted ribbon onto the cuff!  And it was finished!

And here’s the finished stocking again! 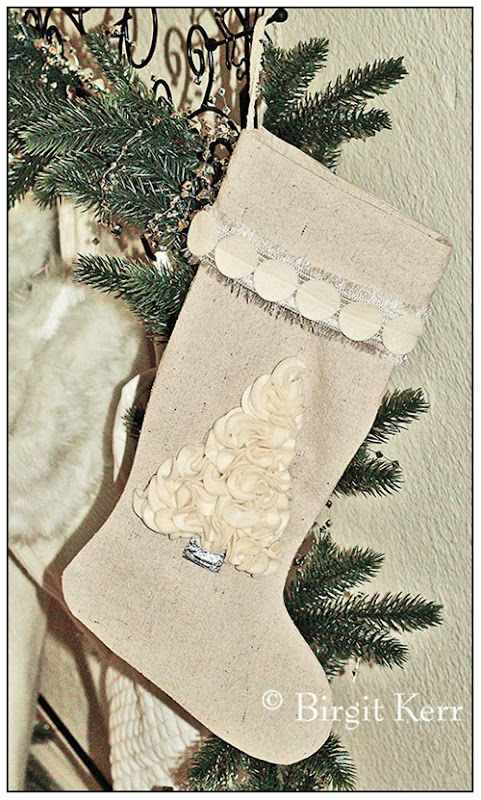 I’ll be linking this project to a variety of link parties over on the side bar! Visit them for great crafting and DIY ideas!