The evolution of our backyard

This was the listing photo of the backyard when we decided to take a look. Not great, but not horrendous either. 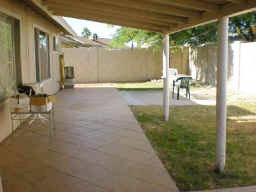 The reality was a little worse though. It was a dirt and concrete patch! The grass was burnt away from 3 months of no watering. The Phoenix summer heat will do that.

But still, we faced several other problems with this backyard. For some reason I only have photos showing the one side of the yard, not the other, so that’s what we’ll focus on, even though there was more that we had to tear out. 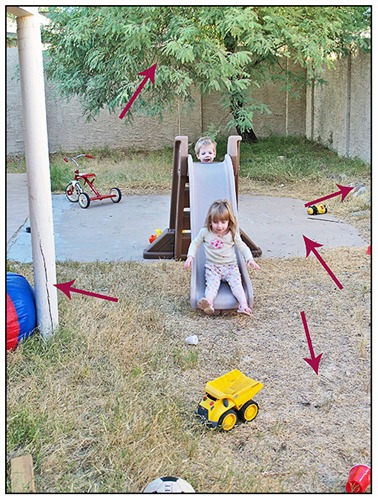 {These are the kiddos on the morning of their 3rd birthday with the new slide! It was 6 am lol}

Anyway, here were our main problems:

1.) A tree that was taking over. And not only that, the tree had pretty long sharp thorns. And we had two just 3-year-olds … it just doesn’t mix! 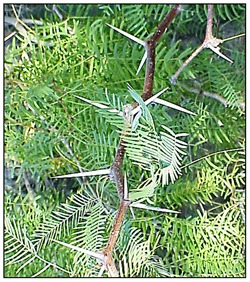 2.) A huge, pretty useless concrete patch taking up a good third of the yard.

4.) Support beams that had started to bow and crack.

5.) Something that might have been a “raised” bed at some point that was in the end however just an accumulation of large rocks that got completely overgrown with crabgrass. It was however impossible to mow because of the rocks and the wall’s situation.

6.) What’s not visible is the other side of the wall that had a rickety structure built that was housing the even more rickety old sandbox my FIL had constructed out of an old industrial sink. There was also a surround that was maybe also the attempt of a raised bed, but it was made from bricks that weren’t secured.

This house was “blessed” with many a terrible DIY project by the previous owners, but that might be a whole different post by itself! 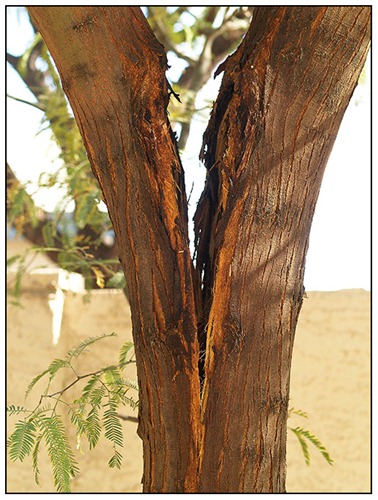 Yep, the tree got hit by lightening one stormy night and it split it right down the middle.

You can even see the charring where it must have smoldered a bit! Thanks goodness for the monsoon rainfall that was happening at the same time! 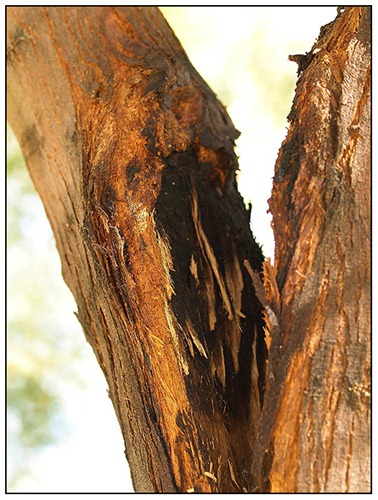 So, the tree issue pretty much resolved itself with that and we had to have it taken out. The tree would not have survived that much of an injury and it was too dangerous to have around the children with that much risk of falling apart.

So, my husband got his chance of a citrus tree, which he had wanted for quite a while!

Then nothing much happened for quite some time, as we were gearing up for construction to the front of the house.

Then, while the construction was going on and we had people with power tools and huge dumpsters etc, we had them take the concrete patch and the rickety wall construction … and eventually the terribly heavy and not at all safe sand “tub”. 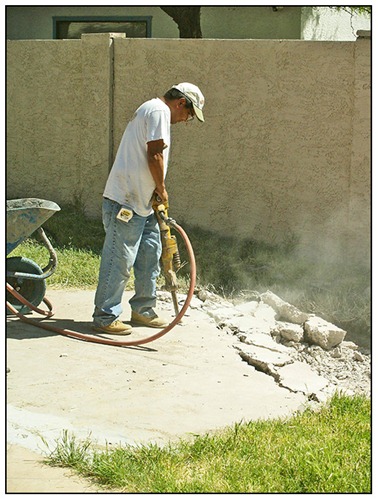 We also had the beams removed, replaced the concrete footing of the support beams and replaced them with new ones. While we were at it we also raised the patio roof by about 1.5 inches, so my husband and I no longer have to duck to walk under it!

When construction was finished and we had our entrance and side yard concrete path poured, we also had them pour the foundation for our “proper” raised bed. 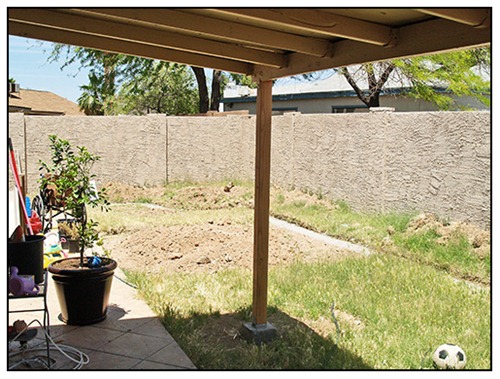 My vision was to have a raised bed running along about 2/3 of that rather depressing wall and have it planted with lots of climbing plants, in the hopes, that soon the wall would dissappear behind a lushious "carpet” of greenery and blooms!

After a lot of work, mostly on my husband’s part … we do have the beginnings of just that! 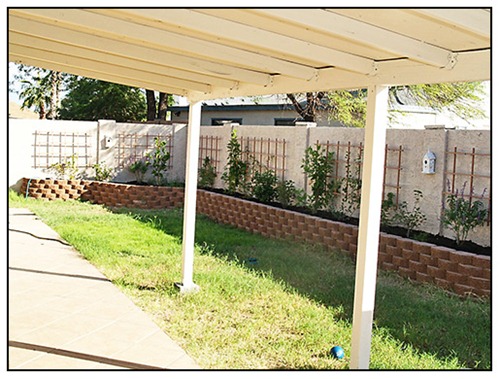 This time next  year, I am sure we will see MUCH less of that wall! 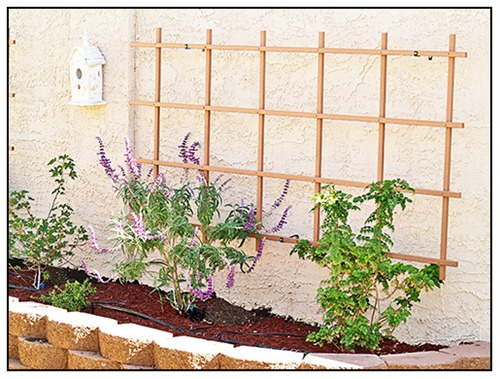 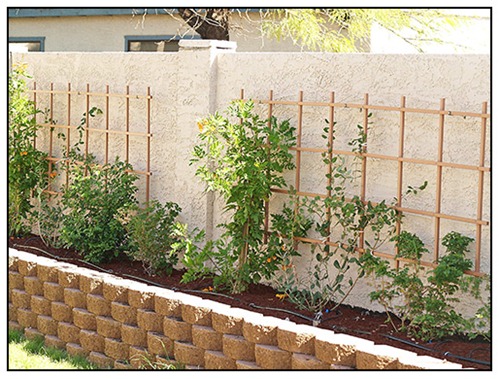 {We’ve since mulched over the soil and watering system

And even now, about 3 weeks after planting, look at all the gorgeousness that blooms in our yard already! 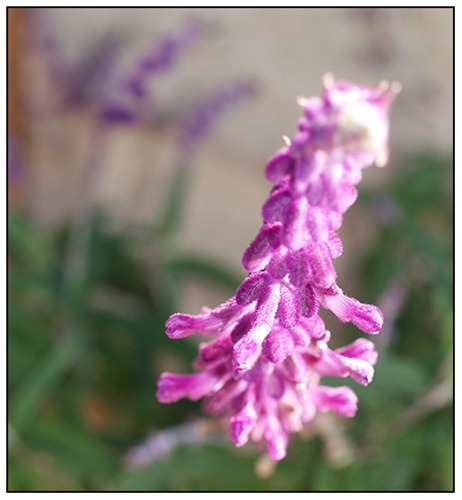 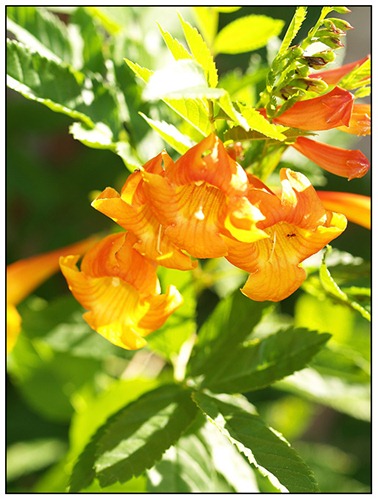 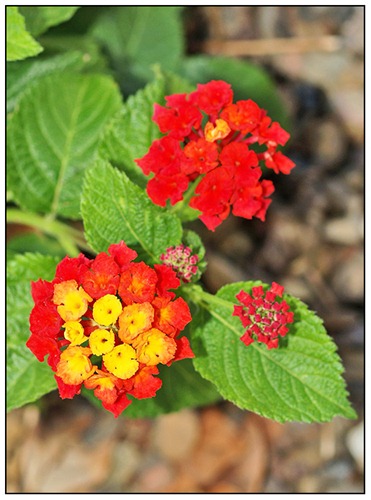 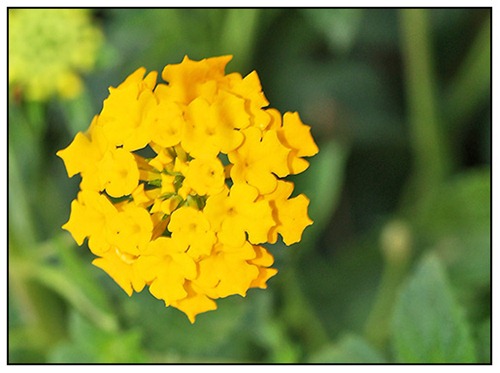 We even have our first homegrown lime! Seems the tree did well with the transition from the pot we had it in for a year to it’s final spot in the corner of the yard! 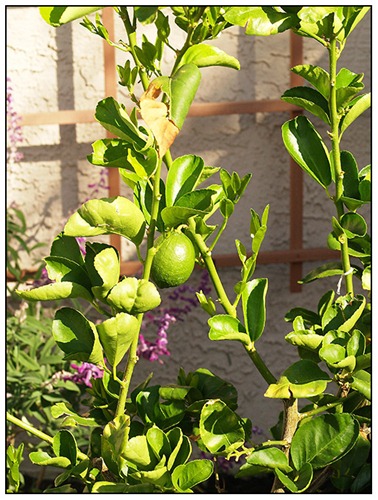 And we got the kiddos a new sand box too! And where the rickety construction was (to the right of the sandbox,) we now have beautiful pieces of slate and gravel fill which echoes the landscaping of the front yard! 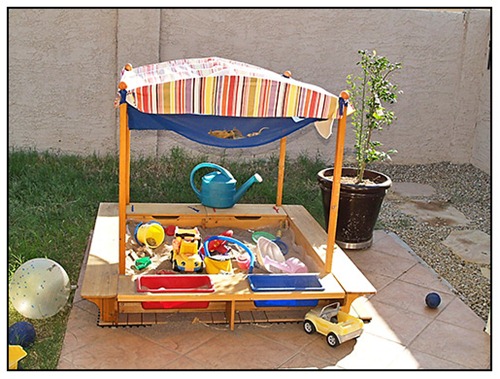 And look … our grass is slowly coming in too. And what was once a concrete patch is now a luscious patch of grass too! We opted against sod and just tried to revive the burnt grass and seeded in between. We also just seeded the patch that was concrete and in a little while we’ll be seeding more summer grass on that patch and more winter grass on the rest of the yard and we should have a year round lawn! 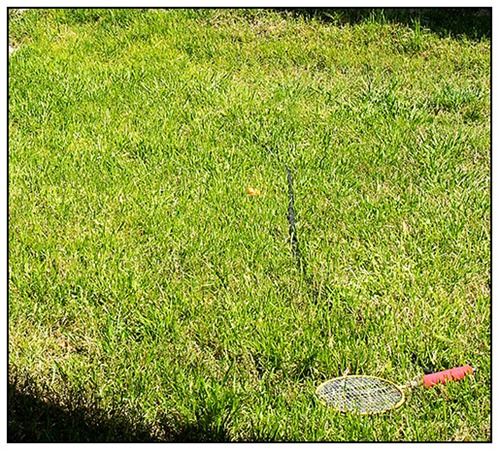 I still have to do a fair bit more to the patio itself.

I started by sewing some seat covers and cushions from Sunbrella fabric, that I got on sale at Jo-Anns! 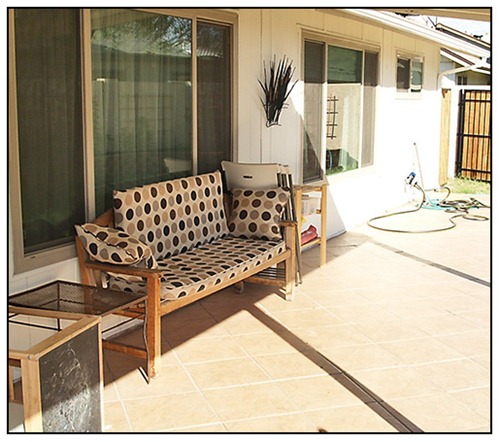 I have many plans for making this patio an extension of our inside living space, even with all it’s limitations. However, right now I’m still waiting for the heat to finally go away, and for the “let’s go outside and stay outside” season to start around here!

Next year, I also want to plant some herbs in the fronts of the raised bed, and some hanging tomatoes on the other side of the wall!

But for now I’m loving our transformed backyard! It might be tiny and it might be a city yard, but give us a year or two and it will be unrecognizable – in a good way!

I will be linking this post to a variety of places on this page as well as:

This entry was posted in Before And After, DIY, Home Decor, Makeover, Wordy Posts, our house. Bookmark the permalink.

4 Responses to The evolution of our backyard