Posted on February 13, 2011 by Administrator

So, as many of you are aware, we recently went “solar.” I talked about it a little in this post. I don’t think we showed you the finished result up on the roof though! So here it is.

Prior to the installation, but after our addition and extended roof line: 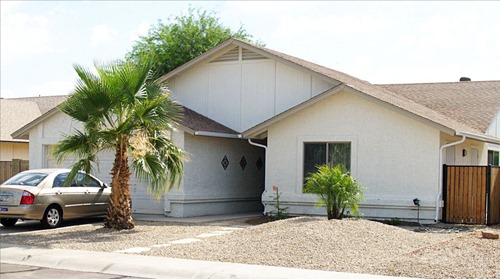 And here we are after the panels went up: 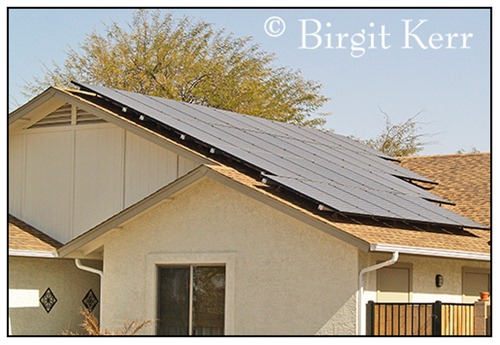 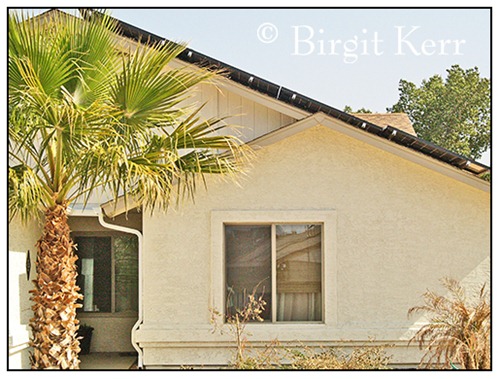 {Please ignore the dead plants … that’s what several nights of  hard frosts in the dessert do to new-ish landscaping!} 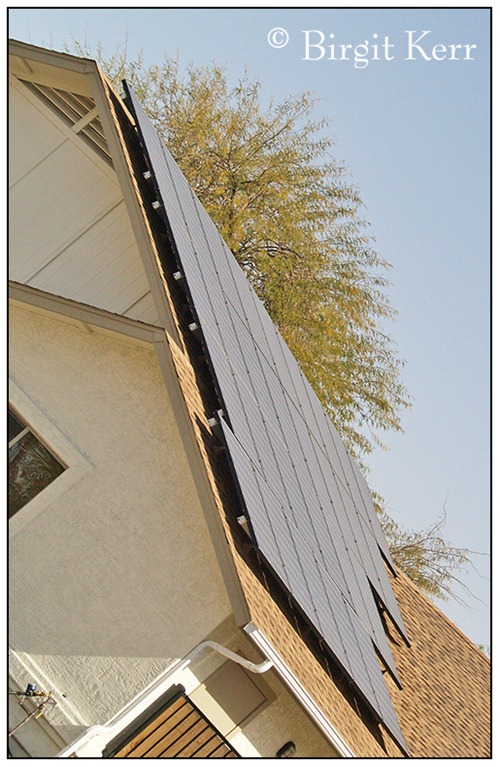 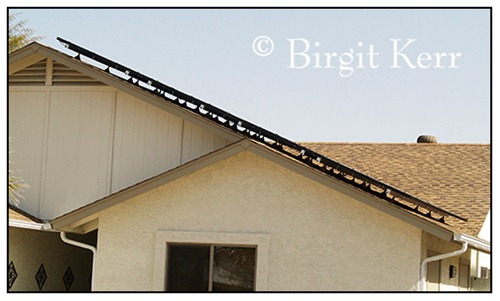 I had visions of ugly huge panels, sticking out like a sore thumb! To be honest I was quite surprised how little we notice them. In fact, they don’t seem to “stick” out at all!

Of course it helped to have the roof built pretty much to specification angle and size wise, so no “scaffolding” was necessary, but more about that later. Suffice it to say that it sure helps the aesthetics that they are as flat to the roof as possible!

We are two months into it now and whenever my husband or I randomly post how much we generated this month/week/day and what that means for our electricity bill, we have an onslaught of questions in our inboxes from folks interested in this.

Since the majority of the research and the process was done by Ian, my husband, I finally twisted his arm enough to write a blog post about our process, what steps we had to take when, what the important things to watch out for are, where the pitfalls were and how we ended up where we are now.

Where are you now, you ask?

In the last 30 days we generated 921 kwh of solar power. Bear in mind that this is winter and the days are shorter and often overcast, even here in Phoenix!

Our latest electric bill was $32 ($1.23/day) plus credits for ~$35 future electrical use. So essentially the electric company is at this point paying US!

Same electric bill last year: $147 ($4.35/day) – and it was warmer too last year which means we used less electricity then as the heating barely had to kick in, but this year we had several hard frosts, which means that the heating did come on a fair bit!

Not too shabby, right?

Well, without further ado … here is Ian with the details!

I’m amazed… amazed that a repost of my 3 line Facebook post would command so much interest and attention.
Perhaps I shouldn’t be amazed. I suppose if I knew very little about solar power and if an acquaintance was saving serious money with it, I’d want to know how he did it too.

At any rate, I’m flattered and humbled by your interest.

I’d like to show my thanks for your interest by embarking on a series of blog posts about my experience with solar power and other home energy topics.

Starting a series of blog posts about home energy with the topic of solar electricity is sort of like how George Lucas must have felt when he began producing the Star Wars movie series… the first film in the theaters was the fourth story in his saga.

Installing solar panels was only my most recent home energy project. I can’t promise you my words will be nearly as exciting as seeing Luke Skywalker blow up the Death Star, but maybe they’ll help you blow a hole in your electric bills.

Before I proceed, let me first warn you that I am from the United States. My terminology, units of measure and cultural references likely will be USA-centric. I hope people in other countries will find some of the concepts useful too.

Let me start my blog post in earnest with the 3 most important planning considerations for a cost-effective solar electric system.

I say this because there are 3 elements of location that play a huge role in the determining the costs and benefits of a solar electric system, also known as a photovoltaic system.

The most-important location element is geography. The dot on Google Earth (or for middle-aged guys like me, the dot on “the map”) that represents your house is significant for several reasons.

The second location consideration is a suitable place on your property for the solar panels. The ideal place for a photovoltaic system is your own home’s roof IF

(a) part of the roof faces south or nearly south
(b) the slope of that roof is about equal to or a bit less than your location’s latitude (for Phoenix: 20-35 degrees is best; 35-50 degrees for New York City).

Building an additional structure specifically for your solar panels probably isn’t worthwhile. You’ll lose the use of the land underneath the structure. You’ll need to build the structure strong enough to withstand the same wind, rain, snow and earthquakes for which the roof on your main house already has been built. Most importantly, it adds to the total cost of the system… and you cannot get a tax credit or a utility subsidy for building a structure to support your solar panels.

Stationary solar panels will capture sunlight the best when facing south and when tilted at your latitude’s angle. Panels that face due east or due west will generate 20-25% less energy than if they face south. A tilt of +/- 15 degrees from your latitude costs you 3-6% in power output. However, there are a few strategic reasons you might intentionally stray from the highest absolute power output.

1.) Time of use electrical pricing.

If you pay substantially more for electricity in the afternoon than in the morning, southwest- or west-facing panels are much more favorable than east-facing panels… and may prove a bigger cost-saver than south-facing panels.

There are mounting systems that let your solar panels track the sun, but they add at least 50% to the cost of the system and only allow you to collect, at most, 40% more power. Also, you can’t attach them to the roof of your house (ground mount only) and sun-tracking systems, because of their moving parts, are more expensive to maintain than fixed systems.

I’ll describe the cost structure of a solar electric system in a later post, but for now, I’ll say there are fixed costs (like the building permit) and costs that vary according to the size of the system (like the solar panels).

Because of the fixed costs of the system, it is almost never worth building a rooftop system unless you have at least 300 square feet (27 m2) of usable roof space… and I don’t think you’ll get attractive returns on a system of less than 400 sq. ft. (36 m2).

That brings me to my third location consideration: where are your sources and potential sources of shade?

Shade is a killer for solar panels, partially because of the way they’re engineered. A solar panel is made up of 30+ individual cells. Due to the way they’re wired together, if any one of the individual cells is in full shade, the productivity of the whole panel goes to zero. If half of a cell is in full shade, and the rest of the panel is in full sun, the panel will produce only half of its potential energy (thus half of its potential payback).

Not all shade is equal. Full shade or hard shade is cast by solid, opaque objects, like your neighbor’s house, block wall, or any protrusion of earth (embankment, hill, cliff). The hardness of their shadows does not vary with the distance of the object. Avoid hard shade at all costs. Soft shade is cast by things like tree trunks and power poles, and less so by tree branches, wires and flags. The hardness of these objects’ shadows varies with their distance. Also, branches of deciduous trees cast harder shadows than branches of conifers.

That said, any part of your roof that’s in hard shade when it’s 2 hours after sunrise or 2 hours before sunset on Christmas should not be considered usable. Following this rule would give a system a minimum of 6 hours of potential sun exposure in Phoenix (or 5 hours on Long Island, NY) on even the shortest day of the year.

As for soft shade, it’s a little harder to generalize, but I’d avoid any area where there is a source of soft shade (excluding power lines or other wires) less than 15 feet (4.5m) away from your prospective panel space. If it’s especially tall shade or dense shade, you’ll need to put even more distance between it and your panels.

Also consider potential shade from the neighbor to the south. Does your neighbor plan to plant an oak tree or build a second story? If you live next to commercial property (especially vacant commercial property) or land that sits on fuel or mineral wealth, what could be built there and how high?

Particularly in the wetter parts of the country, some homeowners will be presented with the conflict of choosing between their 100 year old Oak Tree and their ideal solar site. If that old Oak has sentimental value for you, it will be a very tough decision no doubt.

However, if your only obstacle is the thought of "I don’t want to reduce my carbon footprint with solar panels only to raise it by chopping down some trees," consider this: you can donate $200 to the Arbor Day foundation for them to protect more than an acre (50000 sq. ft. or 4650 m2) of tropical rainforest.

That’ll do more for the planet’s carbon profile than any dozen trees in the temperate zone… and a cost-effective solar electric system would pay you back that $200 and then some.

This entry was posted in Before And After, DIY, Ian, Wordy Posts, energy efficiency, guest post, our house. Bookmark the permalink.